Idaho where the potato is king 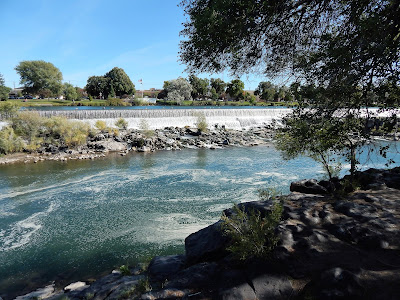 We packed up the car and dropped off the keys and headed into town to have a breakfast at the Peace Tree Cafe then by 8AM were on the road and headed north out of Moab, passing the Moab Giants and after about 20 miles were back on the I-76 heading west past the oasis of Green River. Getting on the the I-6 we started heading north towards Salt Lake City. About 10AM we were ready for a break and some fuel so stopped at the Conoco in Price, the coffee was pretty rank, even for gas station coffee, looking forwards to getting back to the land of KwikTrip. Leaving Price we continued on the I-6 and climbed up through Carbon Canyon into the fresher mountain air. Entering the Wasatch Mountains and over Soldier Summit we saw pockets of vibrant red-orange trees on the slopes. 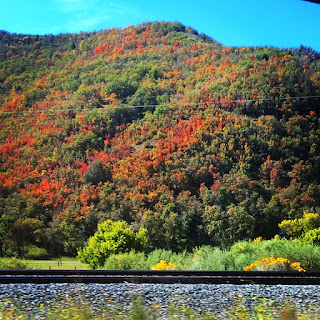 Dropping down out of the mountains we passed through Provo and had spectacular views of the Provo Lake and then on to Salt Lake City where the traffic was much busier.

We passed the Fear Factory which looks like it would have been great to visit, but alas did not have the time. 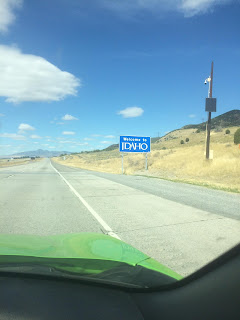 Picking up the I-15 and heading north with Salt Lake to our west, sadly the views of the lake from the interstate are not very good. Stopping at Loves we grabbed fuel, drinks and ice cream and back on the I-15 back up crossed the border into Idaho flanked on either side by the Caribou National Forest.

The landscape in Idaho is very agricultural.

We arrived at Idaho Falls and checked in to our Sleep Inn hotel. After chilling out for a bit we headed downtown to the Snow Eagle brewery and had a great dinner, Tagliatelle for Victoria, Salad and Idaho potato fries for Paul. We washed this down with a flight of eight beers, Paul's favourite was the Porter while Victoria loved the Peach Gose. 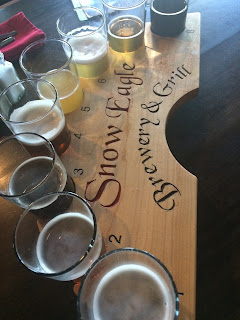 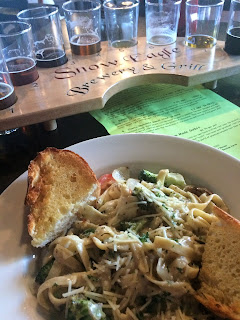 Victoria left her bag (purse) in the bar and was chased down by one of the staff before we had gotten to far. We had a short evening stroll along the Idaho Falls before heading back to our hotel for the evening. 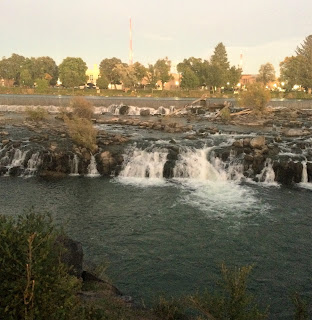 Fact of the day: A National Reactor Testing Station was built just West of Idaho Falls in 1949, and was the was the scene of the only fatal nuclear reactor incident in U.S. history, on January 3, 1961

Day 8 A day out in Idaho

Today was our rest day, so we did not get out of bed until about 8.00AM and had a relaxing breakfast at the hotel of waffles, cereal and fruit. As we were in Idaho we would be visiting the Idaho Potato Museum in Blackfoot about half-an hours drive away. We planned ahead and ordered a baked potato from their website which would be ready in a couple of hours.

There's probably not a couple of hours entertainment in a Potato Museum so on the way stopped off at the Hell's Acre Lava Fields rest stop on the I-15 and walked the lava fields. 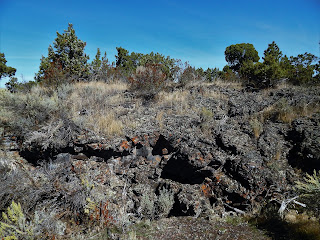 This is a spectacular place, the lava is not from a volcanic eruption, rather where lava spilled out through a weak spot in the earths crust. 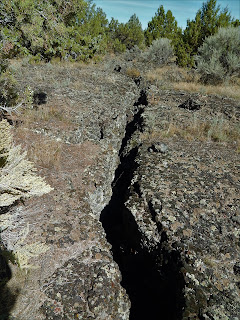 The landscape here is fascinating and the different geological areas, flora and fauna are well documented on the many information boards. There are many stunning and gnarly juniper trees, and here is a bonus fun fact; the reason that their bark is like it is to save water from evaporating even, though they can look dead or broken they still survive. 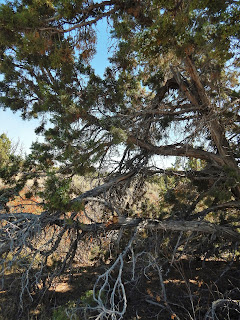 The area is inhabited by Pygmy rabbits, rattlesnakes, yellow bellies marmosets and many other things but we really just saw lots of insects like. 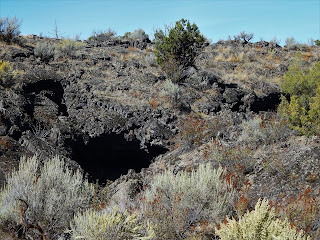 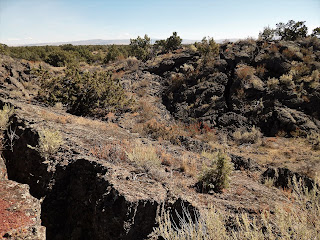 It's a very interesting way to spend an hour and has with great views of the Tetons.

It was now time to head to the Potato Museum, a fun little museum about how the potato came to America, how it was cultivated and the production now. 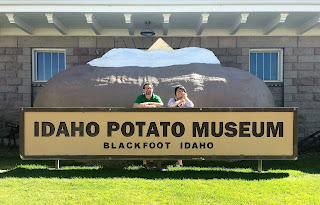 Lots of info and some fun artefacts, for instance, who knew there was a comic book about the Idaho potato and the largest crisp was a 920 cal Pringle? 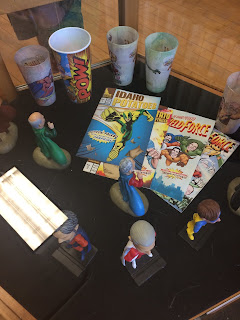 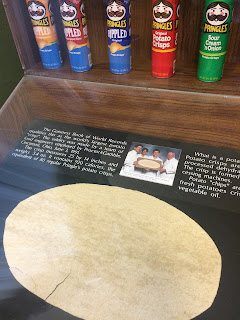 We finished the tour and visited the cafe for our baked potato which we topped with tomato, cheese and green onions - they really don't do Heinz Baked Beans here! As our spuds were a little late we also had a free huckleberry flavoured potato ice cream. 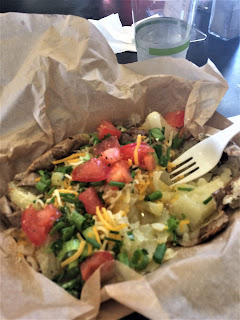 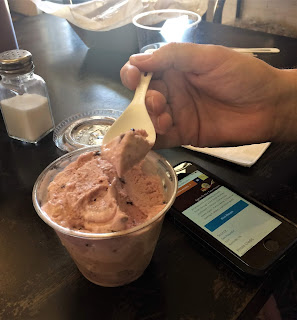 In the gift shop we chose some souvenirs and were given a free pack potato hash, then it was back into Idaho Falls. 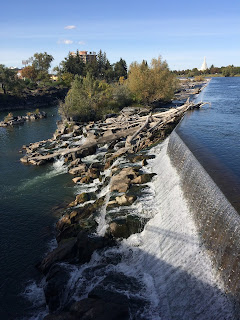 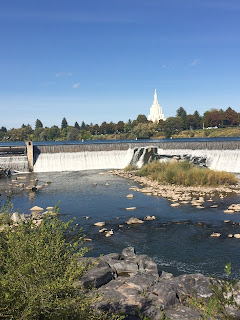 Our first stop was the Idaho Brewing for some beers but they appeared to have a private event on when we went in. Driving into downtown we parked up along the river and did a couple of miles of the river walk, we were so excited to see a Horse Chestnut tree - we thought you did not have them here - and even found time to pick a conker! The riverside Japanese friendship gardens were lovely and well worth checking out. 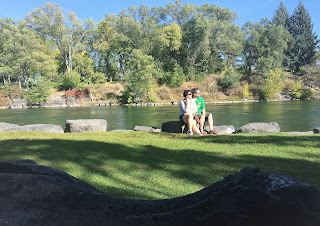 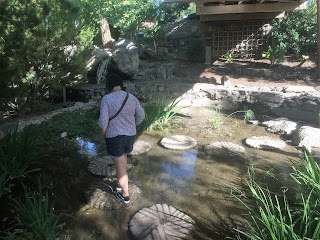 Stopping at the visitor centre we picked up a few more gifts and souvenirs before a stop at Walgreens for some throat lozenges, this cold is really is taking a hold.

Back at the hotel we decided to take advantage of the Hotel's complementary Soup & Salad, No veggie soups were available but we helped ourselves to salad and rolls before ended our free meal with freshly baked cookies and milk, we then had an evening chilling out back in the room.

Fact of the Day: The potato belongs to the same group as tomatoes, tobacco, chile pepper and  eggplant.