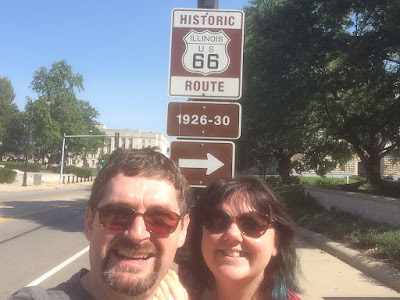 We started the final day of our Route 66 adventure slowly, spending time lounging in our 'Mad Men'  style room before heading downstairs to a  have a rather splendid breakfast in the hotel. Plenty of hot and cold foods that we both could enjoy and a rarity in hotels in the USA, coffee that was drinkable.

Back to the room, we packed up our things and after checking out and loading up the car, headed off on foot towards the State Capitol building a few blocks down. We were able to leave our car at the hotel parking which was super convenient as we were just a block away from the Capitol building. 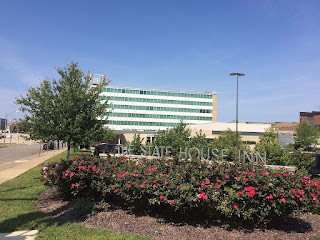 It was a glorious day and the sun shone down on the Lincoln statue. We walked around the outside of the Capitol, passing the replica Liberty Bell. It's a lovely building which reminded me of many Georgian building back home in Blighty. I must say that I do think our State Capitol in Madison is nicer though! 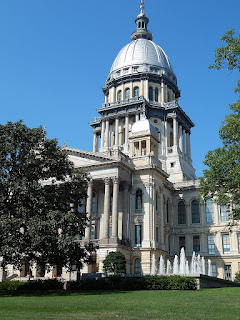 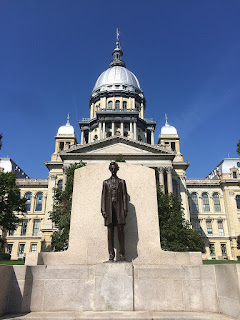 We continued our walk into the downtown area, wandering around the farmers market and finding the old or 5th built Capitol building in Illinois which served as the State house between 1840 and 1876 before becoming too small, leading the way to the building of the 6th State Capitol which we had just visited. 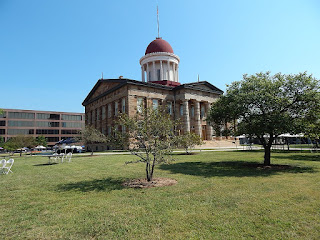 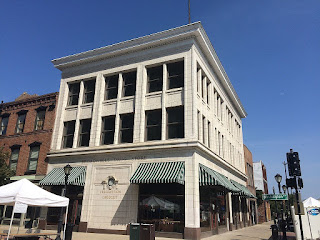 It was now time to hit the road for our final leg, so heading back to the hotel we jumped in the car and after only a couple of minutes drive had picked up Route 66 and passed the State fairground and were heading out of Springfield towards Williamsville.

During our drive we passed many spots relating to Honest Abe including driving thought the town named in his honour. We also passed the yellow water tower with a high smiley face as we drove into Atlanta where we stopped so we could have a look at the Bunyan Giant with his giant hot dog, we meet a great local character who offered to take our picture and we stopped to chat for a while with him. 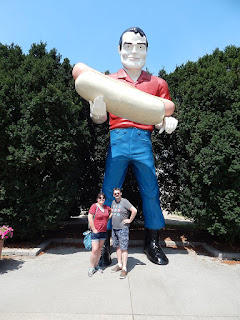 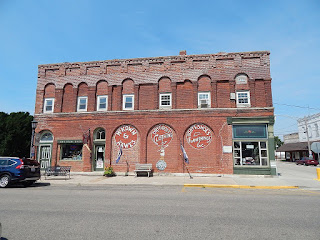 This is what I've loved about Route 66, that it takes you though these small towns which are full of interesting people who are keen to spend time taking about themselves and the area.

Back on the road heading to Funks Grove, we were getting down and funky hoping that they hadn't sold out of this seasons maple syrup harvest, unfortunately they had. Continuing on past the Nestle factory at Bloomington - home of the sole source of Beer Nuts, no we didn't know what they were either before doing a Google search. But we are informed that they are a salty sweet nuts that are an ideal partnership with your beer. 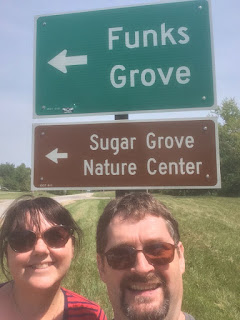 We soon came across the town of Normal, well that seemed like a place we could fit right in to! We had read in our trusty EZ guide that there was a bit not to be missed at a restored 1931 Sprague Super Service Station and Cafe, we thought this would be the idea coffee stop. The station looked very much like a home and indeed the owners would live above the station and cafe. 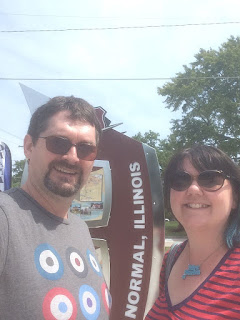 When we got there though we found there was no cafe but it did house a very nice gift shop championing local artists. However the manager did tell us it is planned to open a cafe soon after the last part of the restoration had been done. 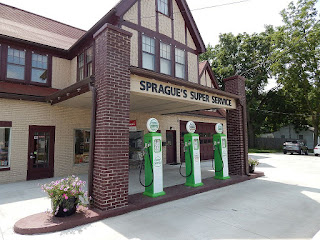 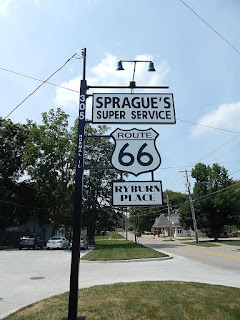 Our plan had always been to not continue along the whole of Route 66 into Chicago, but at some point in Illinois head west into Wisconsin and home to Madison. With around a 130 miles of the Mother Road left, we bid a fond farewell to Route 66  at Linden St, Normal and picked up the I.39 towards home. It felt strange to no longer be driving this road that is embedded with so much American history and quirks, no longer were we finding ourselves on the concrete roads and the now familiar thumping noise as we ride it.

I also felt suddenly unemployed in my role of navigator, I didn't realise just how much I enjoyed following the directions and using my trusty high lighter to mark of the sections as we went. We just continued to head straight on the road, stopping only at Starbucks for refreshments till we found ourselves back home in Middleton, Wisconsin.

You don't just drive Route 66 you become part of it, the community of people who have had the pleasure to say "yep, we've done the Mother Road". Never did I think I would become so attached to it, I now understand what all the fuss is about. It was truly a magnificent adventure. 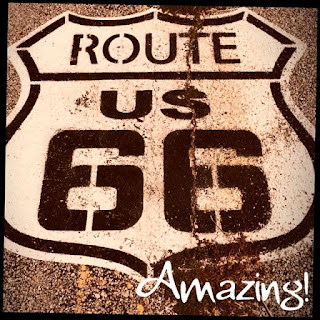